Adesua Etomi is a Nigerian American actress who rose to the spotlight after her outstanding role in the famous movie, Knocking on Heaven's Door. The gorgeous young woman has been active in the entertainment field for more than nine years now.

Adesua was included in the Vogue list of 14 well-known famed global personalities. She is also a married woman. The talented woman tied her wedding knot with her long boyfriend turned husband, Banky Wellington, a notable rapper. Together the duo is also blessed with a son.

How Old is Adesua Etomi ?

Adesua is currently 35 years of age as of 2021. Her birth name goes by Tolulope Adesua Etomi-Wellington. She was born on 22 February 1986 in Owerri, Imo, Nigeria. Talking about her parents, she is the daughter of a soldier of Esan ethnicity background while her mother was an excellent engineer and belongs to Yoruba background. She is the youngest one among her three siblings. 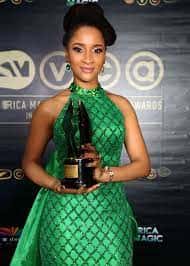 Where Did Adesua Etomi Went To Obtain Her College Education?

Adesua Etomi is a well-educated woman.  Etomi obtained her education from the Corona School, which is situated at Victoria Island, Lagos. Later, she transferred to the United Kingdom, attended the University of Wolverhampton, and obtained her degree with first-class honors.

When Did  Adesua Etomi Start Her Professional Acting Career?

Before making a name in the American entertainment industry, Adesua Etomi made her professional acting debut with Smooth Promotions, where she could be seen playing the role of reporter/presenter in 2012. Since then, she has been seen acting in the TV shows like Gidi Up and  Shuga.

In addition, Etomi has acted in movies like Falling, King of Boys, Up North, Muna, Sugar Rush, etc. Adesua has even won the best actress in a Drama Award in the 2016 Africa Magic Viewers Choice Awards for Falling. Due to her excellent presence in great movies, she was ranked as one of the world's most famous actresses by Vogue.

Adesua Etomi is a married woman. She married her boyfriend, Banky W, on 25 November 2017. The duo got engaged with each other in February 2017. Their traditional marriage was held on 19 November, while their court wedding took place on 20 November 2017. Bank W, also known as Banky Wellington, is a Nigerian-based rapper, actor, businessman, and politician. 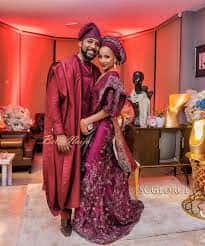 After four years, they were proud parents of their baby son, whom they named Hazaiah Wellington. Their son was born in January 2021. In addition, on 5 April 2021, both the couple shared unknown facts related to their married life which they named Final Say Faith. This story was taken in the Waterbrook church.

The lovebirds have been married for more than four years. However, in all these years, the pair has not been found having an affair or cheating their respective partner behind their back.

What is Adesua Etomi Net Worth?

As of December 2021, Adesua Etomi has accumulated a net worth of $ 1 million to $ 5 million in the region. The majority of her income comes from her fabulous and highly successful acting career. Her annual salary is estimated to be around several hundreds of thousands of dollars. 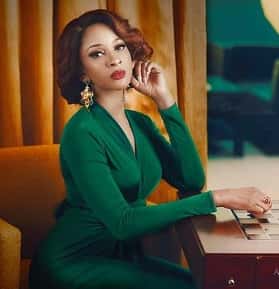 Adesua Etomi is also active on social media platforms. She is a frequent user of the sites such as Instagram and Twitter. Etomi has gathered more than 4 million followers on her Instagram which the young woman uses under the account name @ adesuaetomi and nearly 425 K followers on her Twitter account (@AdesuaEtomiW).

From reports gathered from arealnews.com, Adesua Etomi stands at the height of 5 feet 6 inches  (167 cm) and maintains her overall body weight at 55 kg. She has a slim body build and owns a pair of brown-colored eyes and long beautiful flowing black hair.