Katherine LaNasa is a veteran American actress known for playing the leading role in the NBC sitcom show Three Sisters. She has also gone on to play the character of Gloria Grandbilt in the musical drama-comedy show Katy Keene.

Let us dive into some fascinating details concerning her acting career, husband, children, net worth, and many more in the following paragraphs.

Where was Katherine LaNasa born?

Katherine LaNasa was born on 1 December 1966 in New Orleans, Louisiana, United States of America. Katherine's age is 54 years old at the time of this writing. She is of American nationality having a white ethnic background. LaNasa is the proud daughter of Dr. James J. LaNasa Jr (father), a surgeon, and  Annie Hardin (mother). 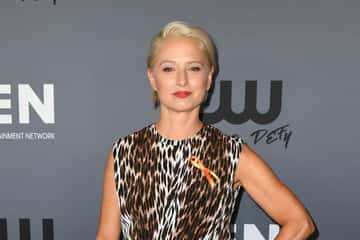 What is Katherine's educational qualification?

She started to dance at the tender age fo12, and later Katherine went to obtain his high school education from the North Carolina School of the Arts in Winston-Salem, North Carolina. To hone his ballet dancing skills, she enrolled in top Ballet dancing institutes such as Milwaukee Ballet, Salt Lake City's Ballet West, and the Karole Armitage Ballet.

How did Katherine LaNasa begin her career?

Before becoming a star, Katherine La Nasa started her career in the entertainment industry by working as a choreography in the movie, Rooftops which was released in 1989. Later, LaNasa acted in movies such as Brain Donors, Kiss & Tell, Schizopolis,  The Lucky Ones, The Frozen Ground, The Squeeze, Valentine's Day, etc.

Finally, she went to make her acting debut with the film, Catchfire, where she worked as a waitress. She has also served as the executive producer in the film Love Is All You Need, released in 2016. Katherine has also acted in TV shows which include Under Suspicion, Seinfeld,  The Marshal, CSI: Crime Scene Investigation, Two and a Half Men, The Divison, Three Sisters, Grey's Anatomy, Imposters, Dynasty, Future Man, Truth Be Told, and many more. 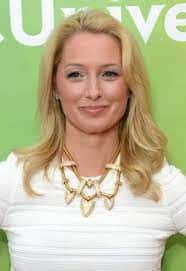 Who is Katherine LaNasa's husband?

The evergreen beauty Katherine LaNasa has been married thrice in her life. Katherine married her first husband, Dennis Hopper, in the summer of 1989. Katherine was a young woman at the time was only 22, while Dennis was 53 years old. However, their married life did not last much longer as the pair separated and finally divorced in April 1992. The former duo also has a son who they named Henry Lee Hopper, born in 1990.

Later in 1998, Katherine went to tie her wedding knot with her second husband, French Stewart. The ex-couple first met on the American sitcom show 3rd from the Sun of an episode titled, Green-Eyed  Dick. But the two later got divorced. Finally, after more than a decade, Katherine got engaged to actor Grant Show in July 2012 before walking down the aisle as husband and wife in August of the same year. LaNasa gave birth to the duo's first child, Eloise McCue, on 21 March 2014. 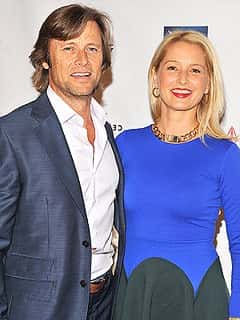 What is the net worth of Katherine LaNasa?

Katherine LaNasa has earned a tremendous amount of income from her outstanding and extremely successful career as an accomplished actress. Katherine has accumulated a net worth in the region of $5 million as of  June 2021.

It was revealed the average salary that an American actress is around $91,401 as of 23 June 2021. Since she is a veteran actress and has been active in Hollywood since the early 1990s, we assumed that her earnings per year are hundreds of thousands of dollars. Currently, she is busy doing multiple acting projects and will surely earn decent money from such acting ventures.

What is Katherine's Body Measurement?

Katherine LaNasa stands at the height of 5 feet 9 inches ( 174 cm) and weighs around 56 kg (123 lbs). Her official physical description read as 34-24-34 inches which complements her overall body structure pretty nicely. She wears 8 (US) shoe sizes and has blue eyes and long blonde hair.